Screenshot of Colonize: a Dwarf-Fortress/Rimworld-like game being developed in Bevy by @indiv0

A little over a month after releasing Bevy 0.3, and thanks to 66 contributors, 178 pull requests, and our generous sponsors, I'm happy to announce the Bevy 0.4 release on crates.io!

Bevy now has a WebGL2 render backend! @mrk-its has been hard at work building the Bevy WebGL2 Plugin and expanding bevy_render to meet the needs of the web. He also put together a nice website showcasing various Bevy examples and games running on the web.

I think the results speak for themselves: 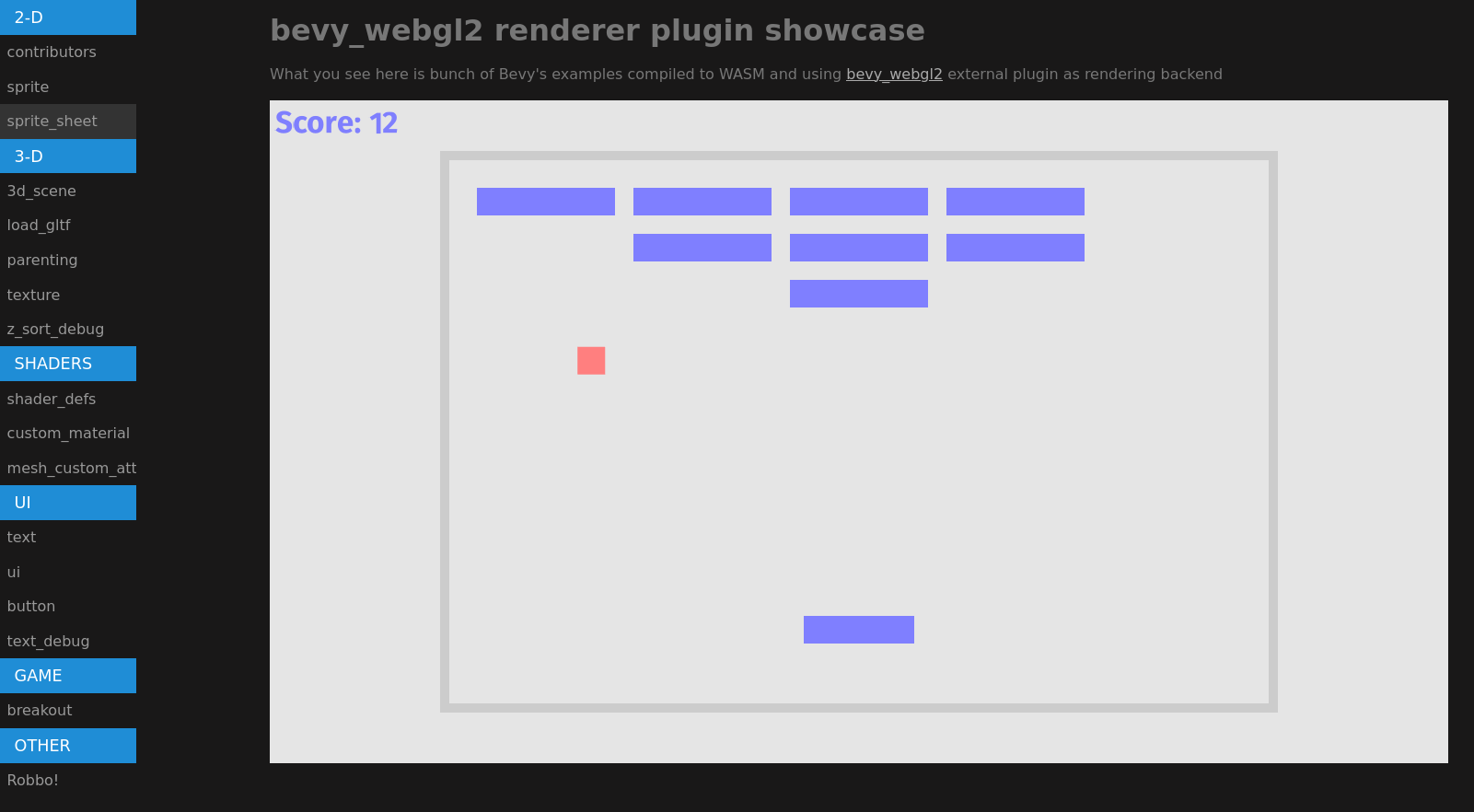 On most supported Bevy platforms you can just use normal main functions (ex: Windows, MacOS, Linux, and Web). Here is the smallest possible Bevy app that runs on those platforms:

However some platforms (currently Android and iOS) require additional boilerplate. This arcane magic is error prone, takes up space, and isn't particularly nice to look at. Up until this point, Bevy users had to supply their own boilerplate ... but no more! Bevy 0.4 adds a new #[bevy_main] proc-macro, which inserts the relevant boilerplate for you. This is a big step toward our "write once run anywhere" goal.

This Bevy App has all the code required to run on Windows, MacOS, Linux, Android, iOS, and Web:

Bevy can now update changes to shaders at runtime, giving you instant feedback without restarting your app. This video isn't sped up!

It wouldn't be a Bevy update without another round of ECS improvements!

Prior versions of Bevy forced you to provide system parameters in a specific order:

To resolve this, I completely rewrote how we generate systems. We now use a SystemParam trait, which we implement for each parameter type. This has a number of benefits:

Notice that in Bevy 0.4, commands now look like commands: &mut Commands instead of mut commands: Commands.

Up until now, Bevy's Query filters were intermingled with components:

First, the nesting of types via With / Without makes it very unclear whats going on. Additionally, it's hard to tell what the Changed<Velocity> parameter does. Is it just a filter? Does it also return a Velocity component? If so, is it immutable or mutable?

It made sense to break up these concepts. In Bevy 0.4, Query filters are separate from Query components. The query above looks like this:

This makes it much easier to tell what a Query is doing at a glance. It also makes for more composable behaviors. For example, you can now filter on Changed<Velocity> without actually retrieving the Velocity component.

And now that filters are a separate type, you can create type aliases for filters that you want to re-use:

Systems can now have inputs and outputs. This opens up a variety of interesting behaviors, such as system error handling:

We use this feature in our new Schedule implementation.

Bevy's old Schedule was nice. System registrations were easy to read and easy to compose. But it also had significant limitations:

To solve these problems, I wrote a new Schedule system from scratch. Before you get worried, these are largely non-breaking changes. The high level "app builder" syntax you know and love is still available:

Stages are now a trait. You can now implement your own Stage types!

This is basically a "normal" stage. You can add systems to it and you can decide how those systems will be executed (parallel, serial, or custom logic)

You read that right! Schedule now implements the Stage trait, which means you can nest Schedules within other schedules:

You can add "run criteria" to any SystemStage or Schedule .

You can now run stages on a "fixed timestep".

This builds on top of ShouldRun::YesAndLoop, which ensures that the schedule continues to loop until it has consumed all accumulated time.

Check out the excellent "Fix Your Timestep!" article if you want to learn more about fixed timesteps.

Now that stages can be any type, we need a way for Plugins to interact with arbitrary stage types:

Prior versions of Bevy supported "for-each" systems, which looked like this:

From now on, the system above should be written like this:

For-each systems were nice to look at and sometimes saved some typing. Why remove them?

By popular demand, Bevy now supports States. These are logical "app states" that allow you to enable/disable systems according to the state your app is in.

You then add them to your app as a resource like this:

To run systems according to the current state, add a StateStage :

You can then add systems for each state value / lifecycle-event like this:

Notice that there are different "lifecycle events":

You can queue a state change from a system like this:

Queued state changes get applied at the end of the StateStage. If you change state within a StateStage, the lifecycle events will occur in the same update/frame. You can do this any number of times (aka it will continue running state lifecycle systems until no more changes are queued). This ensures that multiple state changes can be applied within the same frame. 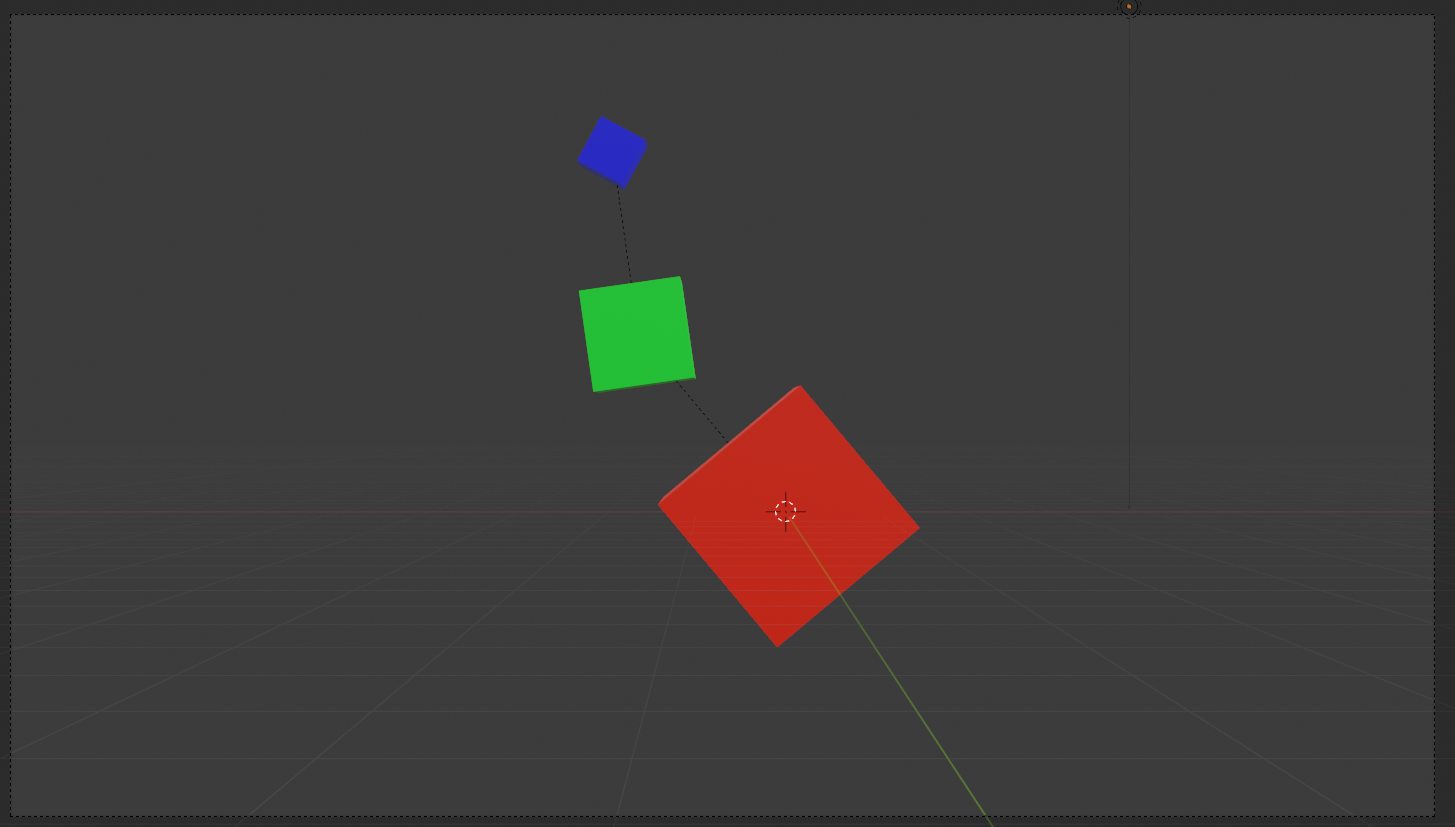 And here is how it looks in Bevy (the lighting is different because we don't import lights yet): 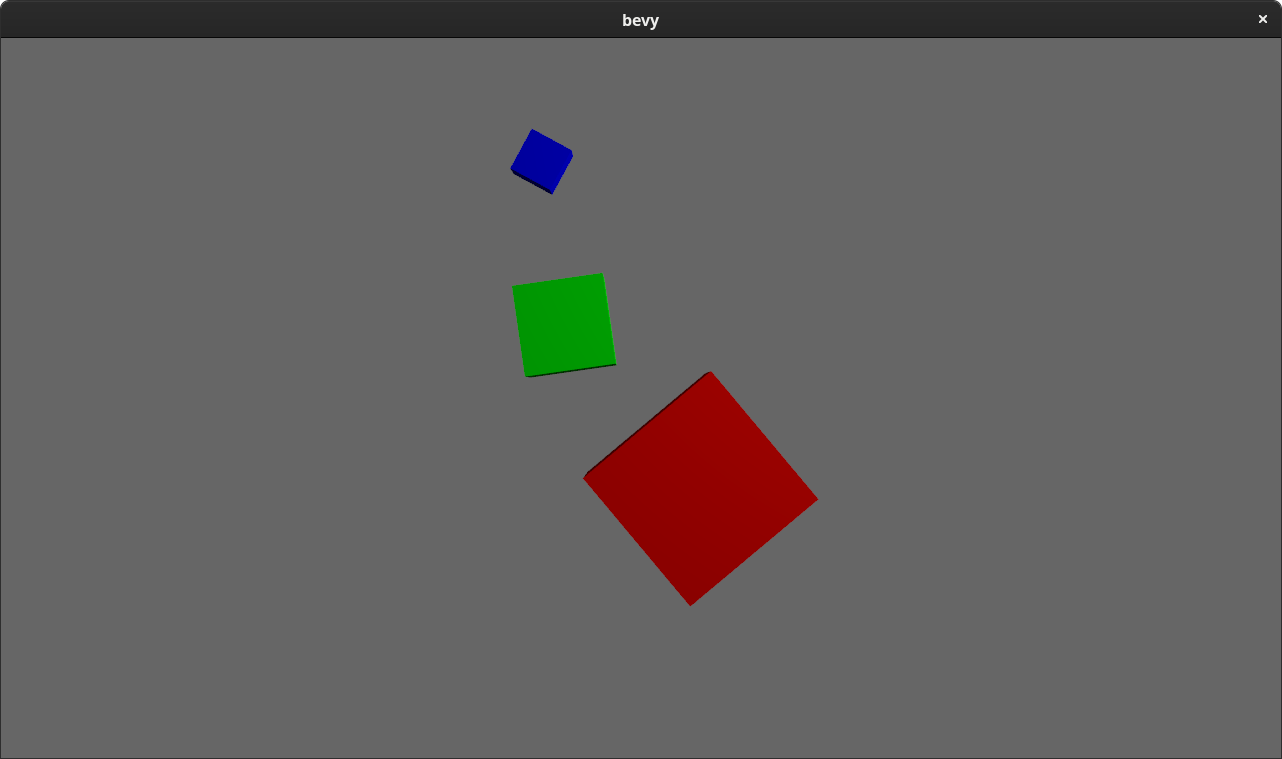 There were also a number of other improvements:

Scenes can now be spawned as children like this:

By spawning beneath a parent, this enables you to do things like translate/rotate/scale multiple instances of the same scene: 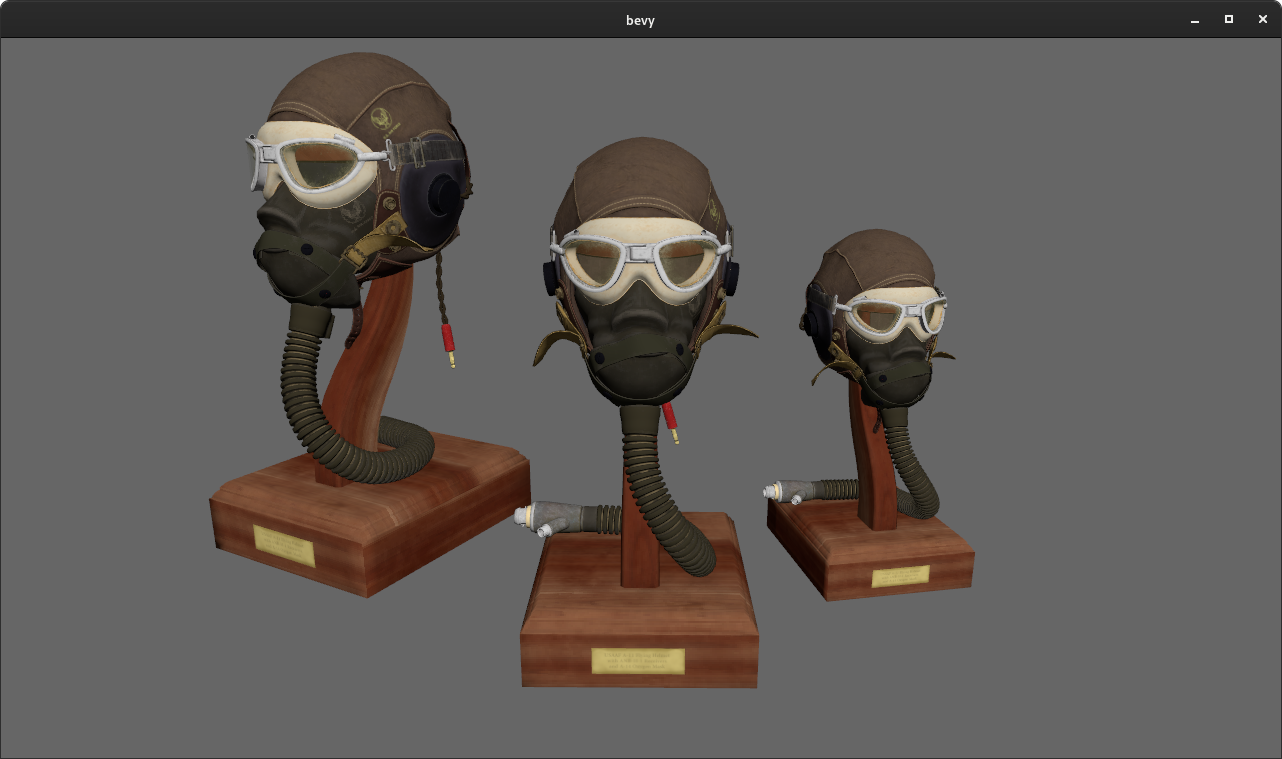 @bjorn3 discovered that you can force Bevy to dynamically link.

This significantly reduces iterative compile times. Check out how long it takes to compile a change made to the 3d_scene.rs example with the Fast Compiles Config and dynamic linking:

Time To Compile Change To 3d_scene Example (in seconds, less is better)#

Just keep in mind that you should disable the feature when publishing your game.

Prior Bevy releases used a custom, naive text layout system. It had a number of bugs and limitations, such as the infamous "wavy text" bug:

The new text layout system uses glyph_brush_layout, which fixes the layout bugs and adds a number of new layout options. Note that the "Fira Sans" font used in the example has some stylistic "waviness" ... this isn't a bug: 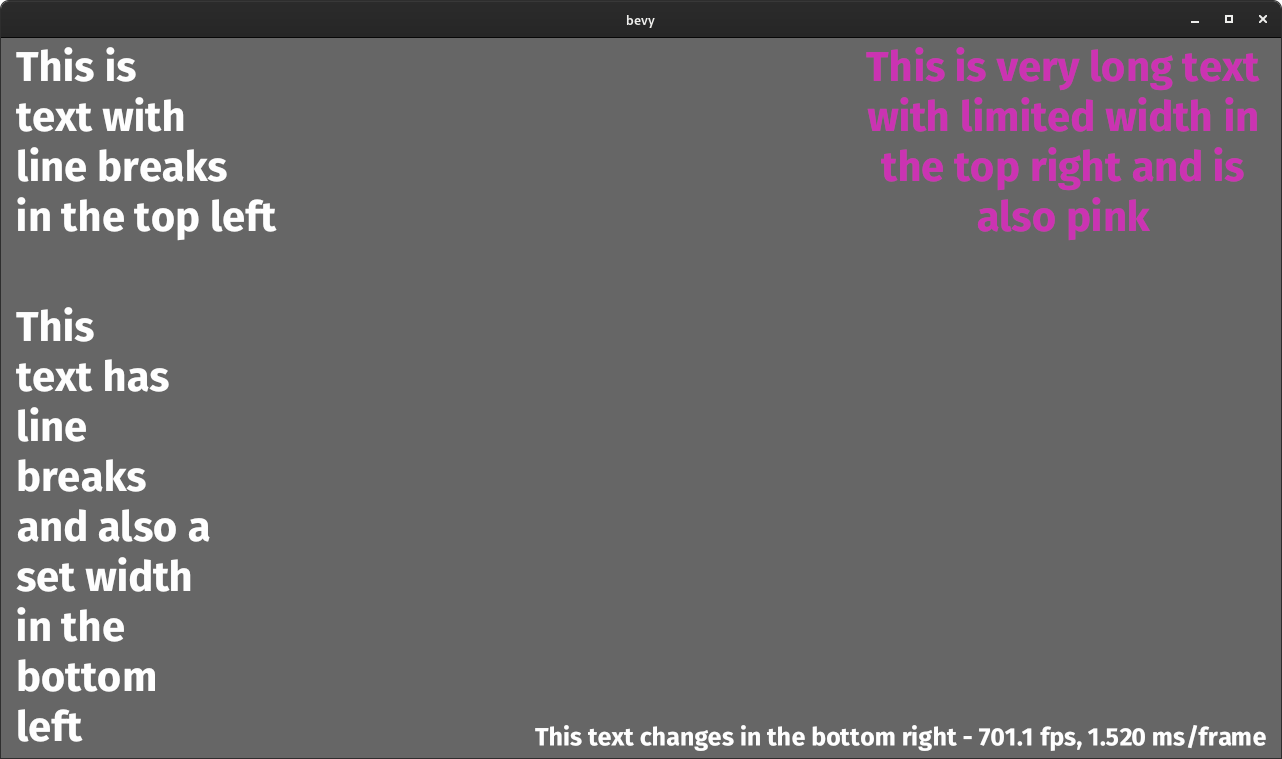 Bevy's render api was built to be easy to use and extend. I wanted to nail down a good api first, but that resulted in a number of performance TODOs that caused some pretty serious overhead.

For Bevy 0.4 I decided to resolve as many of those TODOs as I could. There is still plenty more to do (like instancing and batching), but Bevy already performs much better than it did before.

Most of Bevy's high level render abstractions were designed to be incrementally updated, but when I was first building the engine, ECS change detection wasn't implemented. Now that we have all of these nice optimization tools, it makes sense to use them!

For the first optimization round, I incrementalized as much as I could:

Rust has a pretty big "reflection" gap. For those who aren't aware, "reflection" is a class of language feature that enables you to interact with language constructs at runtime. They add a form of "dynamic-ness" to what are traditionally static language concepts.

We have bits and pieces of reflection in Rust, such as std::any::TypeId and std::any::type_name . But when it comes to interacting with datatypes ... we don't have anything yet. This is unfortunate because some problems are inherently dynamic in nature.

When I was first building Bevy, I decided that the engine would benefit from such features. Reflection is a good foundation for scene systems, Godot-like (or Unity-like) property animation systems, and editor inspection tools. I built the bevy_property and bevy_type_registry crates to fill these needs.

They got the job done, but they were custom-tailored to Bevy's needs, were full of custom jargon (rather than reflecting Rust language constructs directly), didn't handle traits, and had a number of fundamental restrictions on how data could be accessed.

In this release we replaced the old bevy_property and bevy_type_registry crates with a new bevy_reflect crate. Bevy Reflect is intended to be a "generic" Rust reflection crate. I'm hoping it will be as useful for non-Bevy projects as it is for Bevy. We now use it for our Scene system, but in the future we will use it for animating Component fields and auto-generating Bevy Editor inspector widgets.

Bevy Reflect enables you to dynamically interact with Rust types by deriving the Reflect trait:

Interact with Fields Using Their Names#

Patch Your Types With New Values#

Automatically Serialize And Deserialize With Serde#

You can now call a trait on a given &dyn Reflect reference without knowing the underlying type! This is a form of magic that should probably be avoided in most situations. But in the few cases where it is completely necessary, it is very useful:

The Texture asset now has support for 3D textures. The new array_texture.rs example illustrates how to load a 3d texture and sample from each "layer". 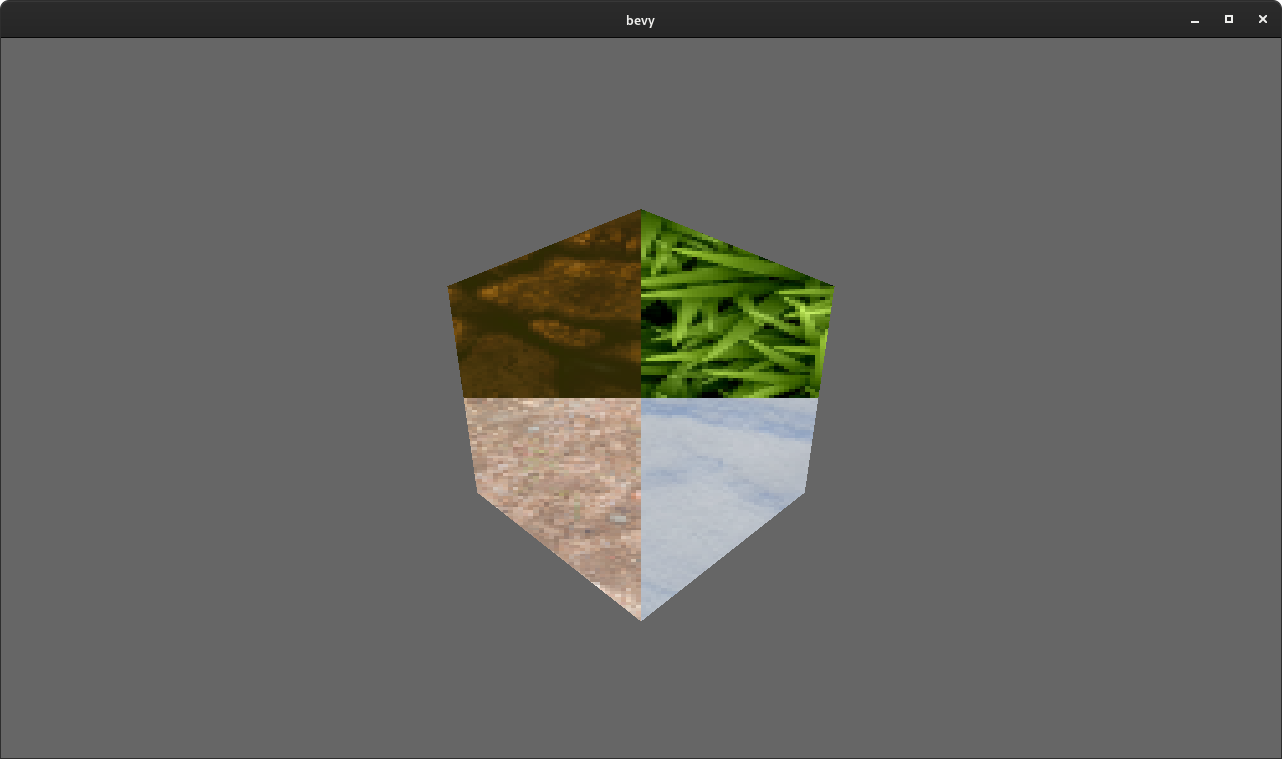 Bevy finally has built in logging, which is now enabled by default via the new LogPlugin . We evaluated various logging libraries and eventually landed on the new tracing crate. tracing is a structured logger that handles async / parallel logging well (perfect for an engine like Bevy), and enables profiling in addition to "normal" logging.

The LogPlugin configures each platform to log to the appropriate backend by default: the terminal on desktop, the console on web, and Android Logs / logcat on Android. We built a new Android tracing backend because one didn't exist yet.

Bevy's internal plugins now generate tracing logs. And you can easily add logs to your own app logic like this:

tracing has a ton of useful features like structured logging and filtering. Check out their documentation for more info.

We have added the option to add "tracing spans" to all ECS systems by enabling the trace feature. We also have built in support for the tracing-chrome extension, which causes Bevy to output traces in the "chrome tracing" format.

If you run your app with cargo run --features bevy/trace,bevy/trace_chrome you will get a json file which can be opened in Chrome browsers by visiting the chrome://tracing url:

There is still a bit more work to be done here. While Bevy UI renders images and boxes at crisp HIDPI resolutions, text is still rendered using the logical resolution, which means it won't be as crisp as it could be on HIDPI displays.

@aclysma changed how Bevy Tasks schedules work, which increased performance in the breakout.rs example game by ~20% and resolved a deadlock when a Task Pool is configured to only have one thread. Tasks are now executed on the calling thread immediately when there is only one task to run, which cuts down on the overhead of moving work to other threads / blocking on them to finish.

@karroffel added a fun example that represents each Bevy contributor as a "Bevy Bird". It scrapes the latest contributor list from git. 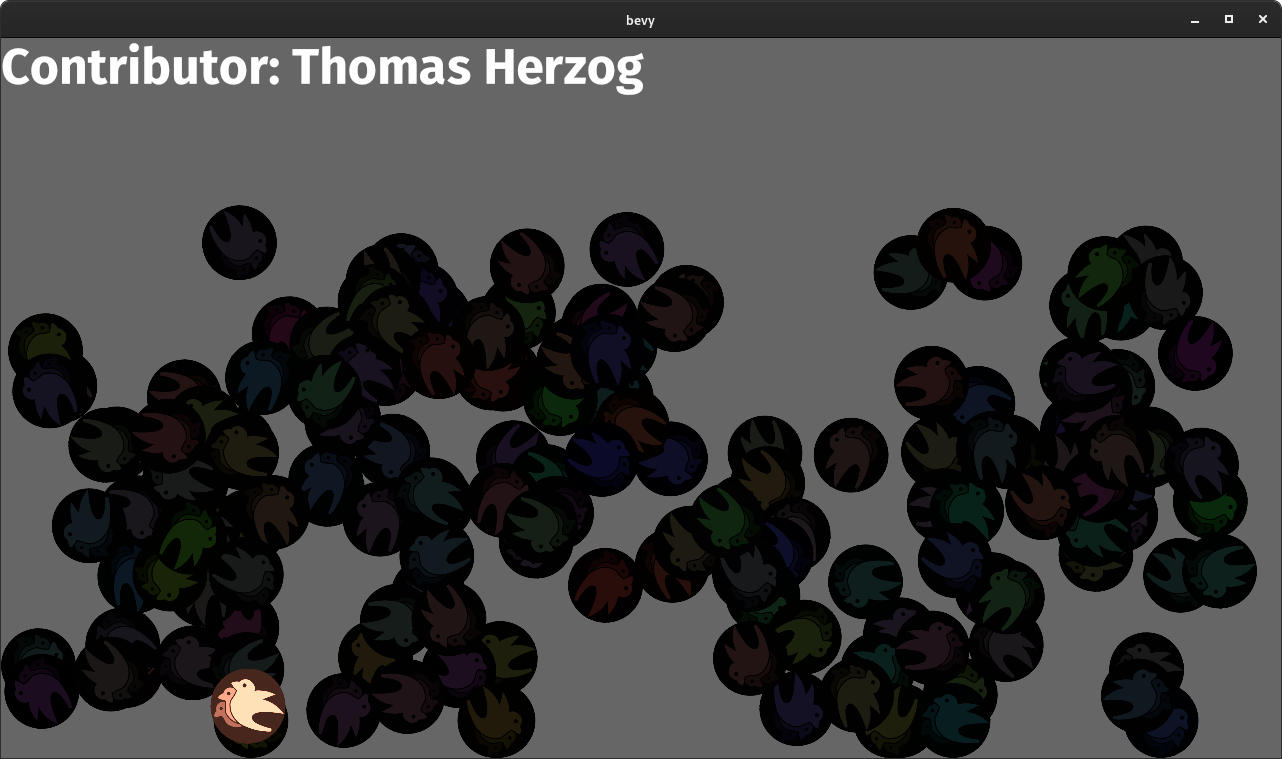 A "bunnymark-style" benchmark illustrating Bevy's sprite rendering performance. This was useful when implementing the renderer optimizations mentioned above. 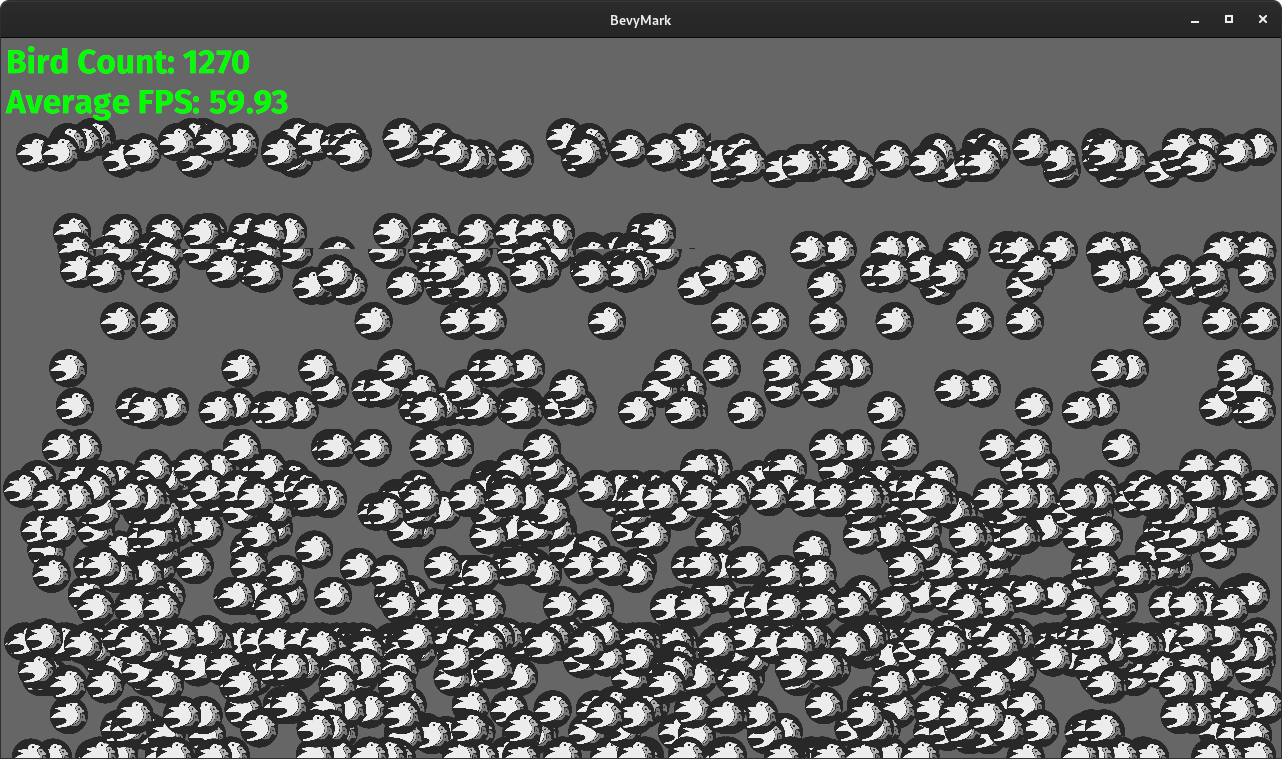 A huge thanks to the 66 contributors that made this release (and associated docs) possible!